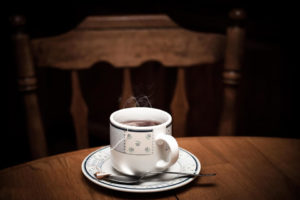 Jane Banbury was sitting at her desk. It was a dark desk, made of solid wood. Empty, apart from sheets of lined paper, an ink pen, a mild table lamp and a cup of steaming black tea. She hadn’t taken a sip yet, not wanting to interrupt the stream of thoughts and images flowing through her mind. She had only got up a short while ago, awaken from a strange dream, and automatically gone downstairs to put the kettle on. Now back upstairs and sitting at her desk, she felt the wake world, with all it’s realistic things, catching up on her.

She had to get this dream down on paper, before it was too late. Through the window in front of her, the dark sky showed first soft rays of light. Daybreak had begun, as she started scribbling on the blank sheet. She didn’t stop until three sheets were filled with neat handwriting and her tea had turned from steaming hot to cold, while beams of warm sun light illuminated her desk.