These two saints were martyrs of the early Church. They died around 203 in Carthage (Roman Province of Africa), injured by wild animals and then finally executed in the amphitheatre, because they stayed faithful to the Christian belief.

Saint Perpetua was a young noble woman and mother who also wrote a record of her persecution. Saint Felicity was a young slave. She gave birth to a son, shortly before her death punishment. Her child was adopted by a Christian woman.

Their feast day is March 7th.

Here I’ve found a free printable colouring page with Saint Perpetua and Saint Felicity.
Coloured in by two of our younger children: 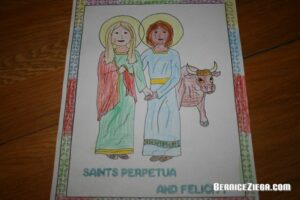 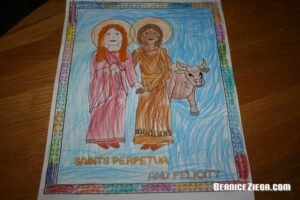