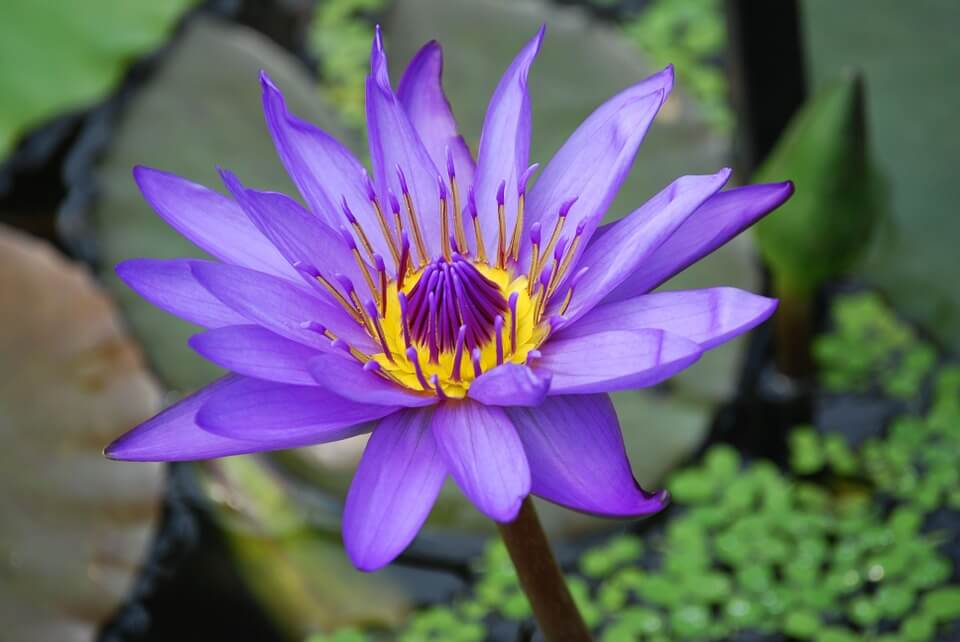 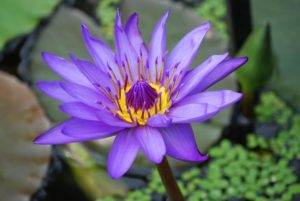 Whenever Angela looked down from the wooden bridge over the narrow part of the pond and saw the water lilies, it reminded her of holidays in Germany.

She had been a little girl then. Her Grandma had introduced her to these water flowers: »If we wait patiently, they will open their heads and you will see how beautiful they are«. Angela had nearly given up waiting, when she suddenly noticed the buds opening slowly, spreading out their purple pointed petals around the yellow shining centre and revealing their full beauty. What a magical moment! Grandma had been right.

Angela still felt the same excitement. “It must be over forty-five years ago”, she thought. “How could a feeling stay so well?”

Grandma had passed away, long ago. Angela was a grown-up woman now, fully responsible for her own life. Sometimes she wished, she could hold Grandma’s strong hand again and be led by her.

The sound of people drawing closer to the bridge and merrily chatting, brought her thoughts back to where she was standing. She bent over the bridge, so the people could not see her wistful face.

When the people were on the bridge, close enough to distinguish, what they were talking, Angela heard, it was German. She wanted to ask them: »Which part of Germany are you from? Why are you here?« She wanted to tell them: »I’m from Germany. My whole family was! I don’t speak much German myself though …« But before she had a chance to do so, the strollers crossed over the bridge and kept on walking and chatting on the other side.

Angela watched their backs moving away and suddenly felt a strong urge to find out more about her relatives, that were left behind in Germany.

As far as she could remember, there had always been something heavy in the family. She never knew what it was. Sometimes she noticed hints, head shakes and squinted eyes, when her family happened to touch on a topic of the past. The subject of conversation usually changed rapidly. It felt like a dark shadow looming in the background, and as it seemed, nobody wanted to talk about it.