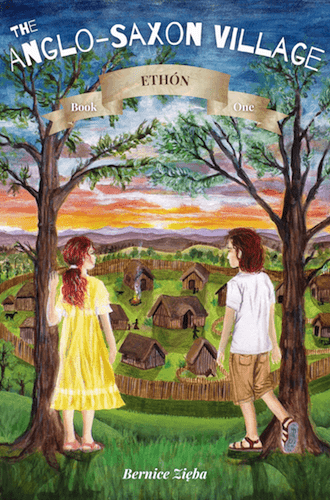 ∼ The Anglo-Saxon Village ∼ Book I: Ethón

Adrian and Rohanna are mysteriously drawn from our world to Anglo-Saxon Mercia, over a thousand years back in time. Here they meet new friends, and get into danger. Adrian is to fight Ethón, a terrible beast that brings disaster to the land. Will he succeed in freeing Mercia from a century of evil forces? On his quest, Adrian meets helpers, villains, and monks who entrust him with an ancient sword. But Ethón is not the only challenge that Adrian must overcome, and when it is time to go back to our world, Rohanna reveals a secret and doesn’t want to return.

(Ages 8-12, and older readers who love diving into the past and into mystical realms.)

The perfect ‘living book’ for learning about daily life during the Anglo-Saxon period. Suitable for home education and classroom.