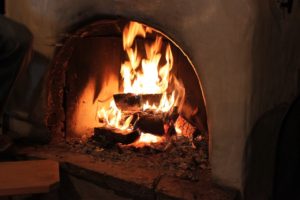 When I woke up, the sun wasn’t up yet. I didn’t hear the coaches screeching, horse hooves clacking or the road sellers shouting. I was woken up by a different noise: My father was running up the narrow wooden staircase calling me, and the way his voice sounded, made me get up without hesitation.

»John, up and out of bed! Mary, Anne both of you out as quick as possible! Peter, out of bed!« and then he burst in my chamber and yelled: »Get up children and run out of the house! The bakery is on fire!«

I can’t remember ever being quicker on my feet then on that morning. I grabbed my clothes, which were hanging over the end of the bed, slipped in my black heavy shoes and tried to decide, what needed to be saved from the threatening fire. I didn’t have time to think, but I also didn’t have much belongings. I grabbed the bible, which was lying on the night table. In one hand I carried my clothes – there was no time to put them on – and in the other hand the black bible and thus I left my bedchamber. It was the last time I’d step over it’s threshold.

I started running down the steep stairs, as fast as I could, which was not easy in my long white nightshirt, which reached down to my ankles. My sisters Anne and Mary, my brother Peter and father came close after me. But before I left through the front door I froze and asked: »Where is mother and the baby?«

»Out with ya, boy!« father said nervously, »They’ve left the house, they’re all right and safe. Now quick, you don’t want those timber beams crashing down on us, do ya?« Relieved by his answer I left our home.

I didn’t see any of the fire until I was out of our house. Then, through the pained window I saw huge red and orange flames which had broken out from the back-room, where the oven was. They were licking the shelves, where I usually stacked bread loaves each morning, before going to mass.

As I watched the flames filling the front room of the bakery, I began to think: »What are we going to do if our house and the bakery gets destroyed? Where shall we live and what shall we live from?«

Later on I stood five yards away from our house and watched father running around, calling neighbours out and organizing pails and water. Mother was sitting on a wooden box nursing Elisabeth, my baby sister. I was pleased to see them safe. I was feeling cold, so I dressed in my clothes hurriedly. When I stepped closer to the burning house, I felt a blaze of heat. Again I asked myself, »Where will we go, if our house burns down?« I had never lived any where else, than in this house, where I was born, ten years ago.

Father ran to me. He was sweating on his face and looking scared. An expression I rarely saw at father. It made me aware, of how earnest the situation was. »John, take this pail and join the chain.« People were standing in a loose queue which led to a water pump at the bottom of the road. A man was filling a pail with water and handing it to the first one in the queue. They passed the pail from one to the other, and finally a man at the end threw the water on our house in the attempt to delete the fire.

I was excited about this job. It made me feel important. But after a while I got very tired. I wished I could sit down or lie in my bed and snuggle up under the woollen blankets. Then I realized, this wasn’t possible any more.

We couldn’t put the fire out, instead the flames were spreading left and right on our neighbour’s houses. The people in the queue stepped back, wiped the sweat off their foreheads and watched devastated, how the fire was greedily licking their homes. It was clear, that the fire would destroy all houses up and down the road. They were all built out of wood with thatched roofs and stood tightly together.

I was impressed by the huge fire. I had never seen anything like it before. I wondered if purgatory was something like that. The heat was just amazing. I wished I could catch some of that heat in a tin chest and save it for winter. Winters in our houses were always so cold because we had to save wood.

I went to mother and sat next to her with my brother and sisters. We were close together and warmed each other that way. I fell asleep and woke up about two hours later and then I heard people saying: »The fire has spread and town is burning!« Suddenly I realized, that it was me who was last in charge of the oven the evening before.

I felt faint, as guilt rose up in me. I never had intended this to happen. How was I ever going to make up for this disaster?  »I am only I child«, I said to myself, trying to calm myself. How was I going to tell mother and father the truth and face all the neighbours, all people in town? »Please God, help me carry this burden«, I whispered.

The day of the big fire in our town, was the first time, I wished to become a constructor. I was determined to build houses, that were made out of other material than wood and straw. Houses that would never burn down.

This short story I wrote at the end of an online fiction course I completed after participating for six weeks. 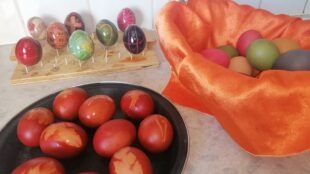